At first, I liked Red Shirts, by John Scalzi (Old Man’s War,The Collapsing Empire and the second book ofThe Interdependency series, The Consuming Fire). I love Scalzi’s writing. His space-action is absolutely riveting, the plots have just the right amount of complexity and twists, and he’s funny as hell.

So, I liked Red Shirts, until about a third of the way in, when things change quite a bit, and not everything (and everyone) are exactly what they seem to be. I lost interest.

Then, needing something handy to read, I see it still in my library, and I dipped back into it, and freaking loved it. It was a very strange experience. I liked the book until I didn’t, but then returned to it and as I finished it, realized that I had just finished reading one of my top 10 favorite sci-fi books ever.

Red Shirts hits on so many cylinders, I feel like I bought a 4-banger Toyota Somethingorother, and driving it off the lot, discovered it’s a 12 cylinder Mercedes AMG luxury machine.

Unfortunately, discussing everything that makes the book so great would require me to spoil it a bit, so I won’t. Probably just as well, since I’d start running at the mouth and not stop until I’d rolled past 40K words, and that would just be sad. I’m a writer too, behind on a couple projects, and generating that many words for a blog that makes me no money at all, would be…unfortunate.

Suffice it to say that if you are a sci-fi fan, you will love Red Shirts in at least two different ways. Yes, early on, Trek fans will think, either hey, you’ve ripped off Roddenberry, or will be suspicious about it. That’s good. Go with that.

Audible listeners will perhaps, be a little misguided by Wil Wheaton’s narration. His performance, as in The Interdependency Series books, is perfect, but the “red shirt” thing, being read by Wesley, may spin you a bit.

Again, go with it.

I liked Red Shirts until I didn’t, but then loved it tremendously. This is a must-read, and to really enjoy it, a must-listen.

The TV and Movie business is changing, and it’s for the better. Netflix started the ball rolling for real with its excellent original production of House of Cards, and we’re seeing some great television being launched without the benefit of the networks. Much like when Oz, the gritty prison drama, premiered on HBO, and introduced us to shows not constrained by Broadcast Television’s language, violence and content rules, once we got a taste of disintermediation, where the producers of programming had a little more direct access to the consumers of their creative output, we knew we wanted more.

A lot more television gets produced than ever airs. Between late January and late March, Hollywood enters “Pilot Season,” where there’s a mad dash of activity on sound stages anywhere television is produced. It’s the busiest time of year for actors who have decent agents, and it’s not uncommon for one to work on several projects. The hope is, one gets picked up by a network and becomes successful. A few attract enough good attention that they get a shot, and every so often, one becomes a Cheers, Seinfeld or 30 Rock. Usually though, they become a Roll Out, the decidedly unfunny sitcom that tried to cash in on the success of MASH* in a show about race relations among American troops in World War II. Didn’t work. Twelve painfully boring episodes were produced and aired before the whole project was quietly thrown into the trash. Don’t ask me how I remember it. Believe me, the thought that I’m using brain cells to retain all this disturbs me greatly. Regardless of the show’s failure, there was apparently a pilot that led people to believe the show would make it. I’d hate to see the shows that Roll Out beat to make a spot in its network’s lineup. The point is, a lot of pilots get made. A very few get picked up. The vast majority are never seen by the public.

Amazon recently began a bold and innovative program that provides a pathway for independent productions to gain commercial release. Here’s how it works:

The pilot is produced, and made available to Amazon Prime Video subscribers. Amazon customers can watch it, and based on the success of the show, Amazon either picks it up as a regular series or not. It’s putting the decision of whether a show becomes a thing or not a little closer to the people who truly matter, the audience. It’s not perfect, since Amazon Prime Video customers don’t necessarily reflect the tastes of the video-watching public, but it’s a hell of a lot closer to reality than some group of Hollywood TV industry guys deciding what you and I get to watch.

Amazon’s most recent Pilot is excellent. Really. Hand of God tells the story of a judge, (Sons of Anarchy’s Ron Perlman) who loses it after his son attempts (and mostly succeeds in) suicide. The first scene shows a police officer, played by Emilio Rivera (Sons of Anarchy, Gang Related, and one of the Priceline commercials where William Shatner plays a long grey bearded biker – Emilio’s one line is “Hey, those guys ain’t no Dragons,” which he wisely delivers with a bandana worn to almost cover his eyes – you have to be an Emilio fan to recognize him, which I am), who wades into a big fountain to coax Perlman’s character out. The judge has shed all his clothes, and is in the fountain speaking in tongues. Obviously, this is a problem, not just for the judge, but also for his wife, played by the magnificent Dana Delaney (Desperate Housewives, Body of Proof, China Beach, and his business partner/Mayor, played by Andre Royo (The Wire). Judge Harris is obviously unbalanced, and claims to be in communication with God. In his court, he finds an acolyte to command and inspire, a heavenly henchman, if you will, in KD, played by Garret Dillahunt (Life, Burn Notice, 12 Years a Slave). Dillahunt is perfect. My exposure to him to date has been as recurring characters in the excellent ABC series, starring Damen Lewis, Life, and the successful USA Network spy series that ended a great run last year, Burn Notice. In both cases, Dillahunt played complete psychopaths, and he does it well. Perfect for KD in Hand of God.

Perlman as the damaged Judge Harris is wonderful. As big and bold and unique as he is as an actor, the subtlety with which he brings his characters to life is really incredible. As satisfying as it was seeing Clay Morrow die last season in Sons of Anarchy, I have to admit, the show feels Perlman’s absence. I’d like to think Sons show-runner Kurt Sutter intended that, but as good as KS is, I’m not sure it’s as simple as that. Sutter has admitted the audience’s reaction to the loss of Jax’s best friend, “Opie,” in the previous season was a surprise, and if it was in his plan to eliminate an evil character, but then have an even darker, denser evil rush in to fill that void, then my outlaw-black half-helmet is off to him. Well played, indeed, sir. I am shocked at how much I miss Perlman on Sons. The point is, when you have an actor as skilled as Perlman in your cast, you have a brush that can fill entire sections of canvas with paint in seconds, but still highlight the crow’s feet on a face we see from several yards away.

I’ve often remarked that Al Pacino is such a great actor, because we can see him play, not only Michael Corleone, the quiet, yet ruthless crime family head but also the sad, passed over wiseguy, Benjamin “Lefty” Ruggiero, without any hint of the other character present in either performance. Pacino is amazing. And so is Perlman, I’ve come to realize. Though some mannerisms are similar, the raised voice of Clay Morrow is the raised voice of Pernell Harris, but they’re different in a way I can’t identify. I don’t expect Judge Harris to walk out of the courthouse and swing his leg over a Harley Dyna-Glide. Even when Perlman hammers down his gavel from the bench, issuing his ruling as KD stands before him as a defendant, it prompted no flashback at all of Clay Morrow gaveling an end to a SAMCRO meeting around the reaper table on Sons of Anarchy. Amazingly, I didn’t even notice the gavel connection until I was writing this. Two different guys, using two different gavels for two completely different purposes.

Hand of God is great television. Well-written, cast and shot. It’s absolutely top-notch television. GOD, I hope Amazon decides to pick the show up. The twist at the end, completely unexpected, and game-changing, makes leaving this story untold something that will seriously disappoint me. 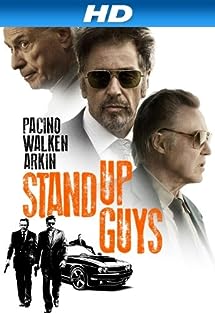 If you have either Netflix or Amazon Prime, you really need to watch “Stand-Up Guys,” since you’ve already paid for it, and it’s a wonderful movie. I’ve always been in awe of Al Pacino, the rare kind of actor who can play both the head of a huge crime family (The Godfather) as well as a down on his luck, low level wiseguy (Donny Brasco) without either of those roles influencing his take on the other. He displays this amazing talent again, adding another completely unique mob character to his portfolio in Stand-Up Guys. Playing opposite Christopher Walken, Pacino creates a bad guy whose heart would be in the right place, if it only weren’t so damn big. Far from an anti-hero, Valentine, or “Val” to his friends, despite spending the past 28 years in prison, is an obvious master of his nefarious craft, but a good guy, which we assume is the cast in the opening scenes, one of which shows him warmly shaking hands with the prison guard escorting him to the exit gate.

Walken’s character is far more conflicted, for reasons that eventually become clear, but proves he too is a stand-up guy on many levels. Always entertaining, Alan Arkin provides the predictable long-suffering, naval-gazing Jewish friend whose job it is to reveal other characters, but at the same time revealing his own interesting and touching story.

There’s a great message in the movie, that holding a grudge is never a good idea, nor is assuming youth and vitality trumps experience that has nothing to lose.

The beginning of “Stand-Up Guys” is executed perfectly, and the ending, though not what I thought it would be, likewise. Jon Bon Jovi’s music is an essential foundation for the story, much better than what most directors would do, recycling pop songs from these gangsters’ day in the sun. Bon Jovi’s original tunes are a much better soundtrack for this film, acoustic and modern, yet introspective. Nice stuff.

I don’t think this film did well in theaters, but it deserves success. Great story, wonderful script executed flawlessly by two of the finest actors who ever worked in front of a camera.